Robert Mladinich is a retired NYPD detective, who has named Cop of the Year in the South Bronx in 1985. He is the author of several true crime books, including From the Mouth of the Monster: The Joel Rifkin Story, Lethal Embrace, and Hooked Up for Murder. From The Mouth Of The Monster was inspired by his profile of Joel Rifkin that was published in Details magazine and was discussed on Court TV and the Leeza show. Mladinich is a former heavyweight boxer and journalist whose articles have been featured in The Irish Voice, The Amsterdam News, Gallery, Hadassah, The Ring, The Harlem Resident, Playboy, and Details. He is and is the writer/editor for Frontline, a publication of the NYC Sergeants Benevolent Association. He lives in New York.

Bernard J. Whalen is a lieutenant in the NYPD, where he has served for more than 34 years. He has published two books, The NYPD’s First Fifty Years and the novel Justifiable Homicide. He lives in New York.

Philip Messing has been a journalist who has covered crime and law enforcement for more than 35 years. He is a veteran staff reported for the New York Post and lives in New York. 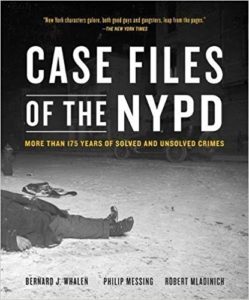